Jess and I took a much needed night out last Wednesday (April 16th), and went to the sold out Eddie Vedder (pearl jam) show at Spreckles Theatre downtown.  The show was the last of a small tour that he did to help promote the "Into The Wild" dvd release, of which he did the whole soundtrack.  If he haven't seen the movie or listened to the soundtrack both are worth picking up.

The show was actually the first time Jess and I have seen Eddie in that intimate of a setting and we couldn't have asked for a better show.  The opening band was Liam Finn, a one man band out of New Zealand, he was very good.  Sort of like the White Stripes, but with guitar/vocal looping and he can actually play the drums:) We had great seats, although any seat there is good.

He played about 2.5 hours, mostly his solo work and covers, and he did a good job cracking jokes and calling out the hecklers.   He also brought out the actor from Into the Wild, Emile Hirsch, which was kind of funny because Eddie sort of just sang to him, not sure if Emile can sing or not but he sat there for a song and took it like a man. All in all a very good show, we are doing are best with getting the baby some exposure to good music early! 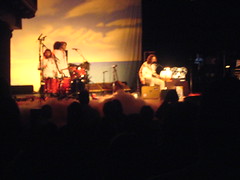 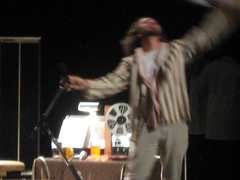 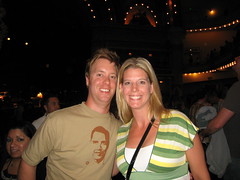 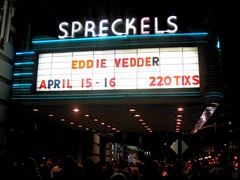 Main Set:
Walking The Cow (Daniel Johnston)
Around The Bend
I Am Mine
Dead Man
Man Of The Hour
Setting Forth
Guaranteed
No Ceiling
Far Behind
Rise
Millworker (James Taylor)
Goodbye
Broken Hearted
Soon Forget
Don't Be Shy
Here's To The State (PHIL OCHS)
You've Got to Hide Your Love Away (Beatles)
Trouble (Cat Stevens)
If You Want To Sing Out (Cat Stevens)
Forever Young (Bob Dylan)
Porch

1st Encore:
Sean Penn Toast And Roast (very funny tribute to Sean Penn)
Society
Throw Your Arms Around Me (Hunters and Collectors)
I Used To Work In Chicago
Let My Love Open The Door (The Who DUH!)
Lukin 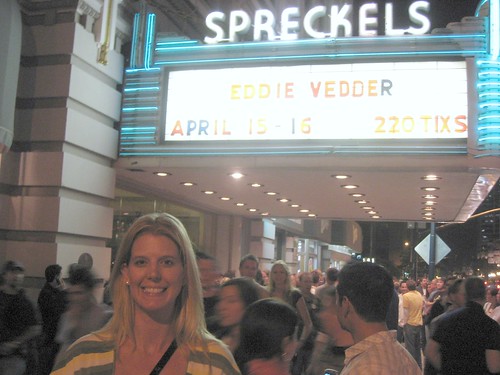 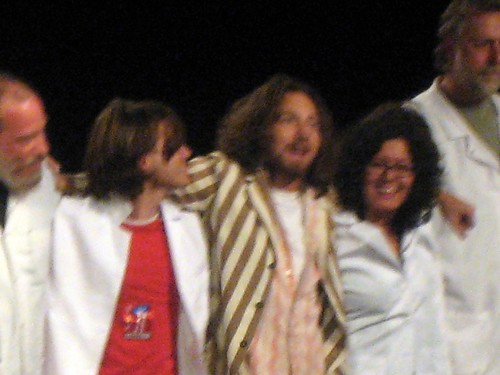